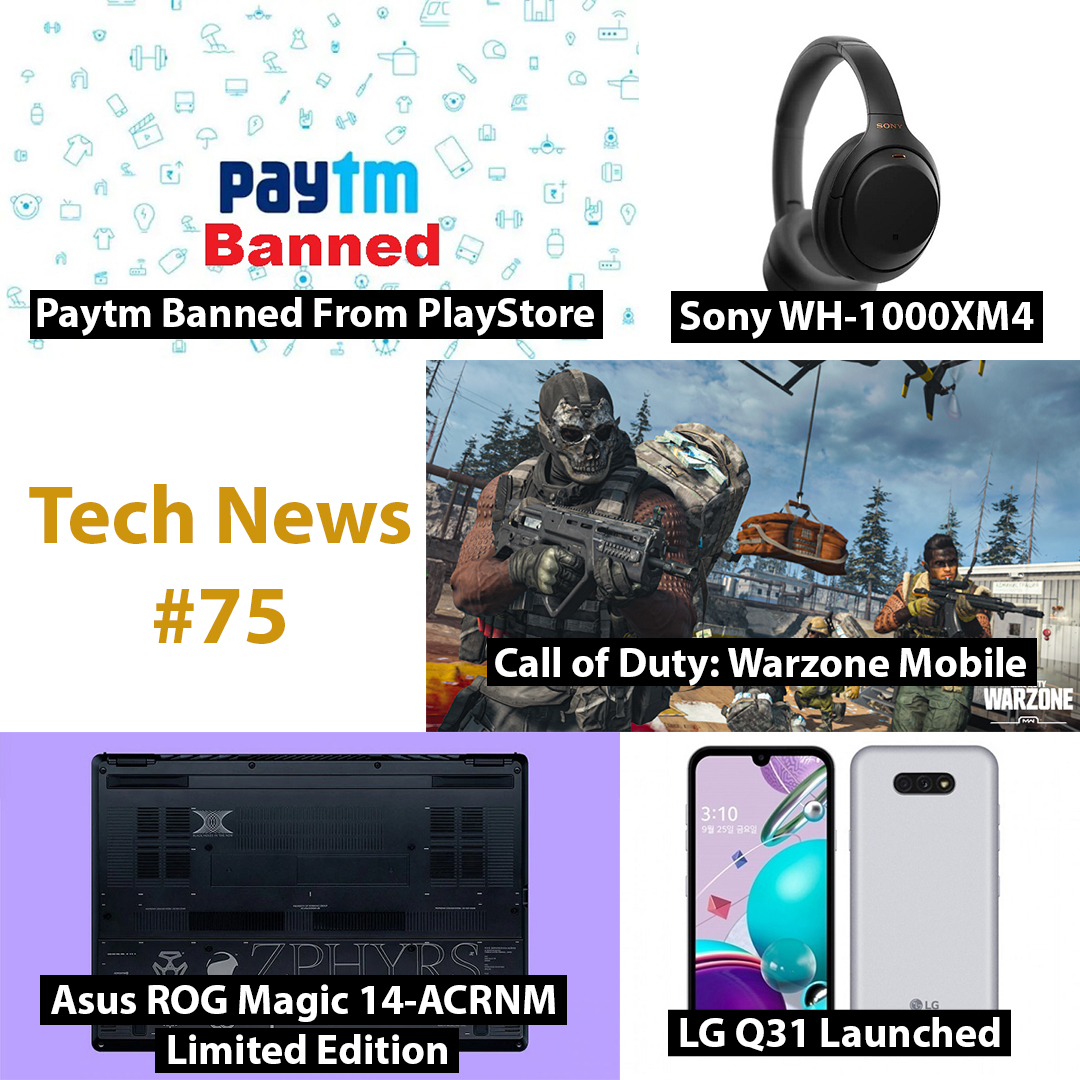 Asus ROG Magic 14-ACRNM Limited Edition gaming laptop has been launched in China. Asus has collaborated with Munich-based fashion brand ACRONYM for the limited edition laptop and it carries the ‘ZPHRYS’ branding on the bottom panel and a dotted top panel with a unique design.

It is backed by a 76Wh battery that can last up to eight hours. For connectivity, you get Wi-Fi, Bluetooth, an HDMI port, three USB 3.0 ports, and a USB 3.1 port.

The Asus ROG Magic 14-ACRNM Limited Edition is priced at CNY 20,999 (approximately Rs. 2.28 lakh) in China. It is up for pre-orders in the country through the Asus store, JD.com, and TMall. It will go on sale from September 19.

2. Paytm App Got Taken Down From Google Play Store.

Paytm has been removed from Google Play Store. Alongside the Paytm app, Paytm First Games is also no longer available for download through Google Play.

Google posted a blog post that highlighted its gambling policy that doesn’t allow app developers to facilitate sports betting. This was a feature that was provided by Paytm through the recently announced fantasy cricket tournament.

Paytm posted a tweet to confirm that the app will be restored very shortly, and reassured users that their money is safe.

3. Call of Duty: Warzone May Come To Mobile.

A job listing on Activision’s website has suggested that Call of Duty: Warzone may be coming to mobile phones. The position listed on the website had the title ‘Executive Producer, Features (WZM)’. WZM here might refer to Warzone Mobile.

The job information also states that it is a new AAA mobile First Person Shooter (FPS) game which is another that Warzone may come to mobile. Further, the listing states that this person needs to learn how to adapt Warzone into a mobile experience and understand what aspects of the mode need to carry over. The console experience can be somewhat replicated on mobile thanks to advancements in mobile development over the years.

All these signs point towards a mobile version of Call of Duty: Warzone currently in development. This was first spotted by CharlieIntel who also managed to take screenshots of the listing and talked about this in detail. The job listing is not viewable currently on Activision’s website. It says that “Sorry… The job you are trying to apply for has been filled”.

We cannot expect any release date for the game. The name of the game is not even announced yet and also there is no information about the same from the company.

Sony WH-1000XM4 wireless active noise-canceling headphones have been launched in India one month after its global launch. With the launch of the Sony WH-1000XM4, the company will be discontinuing the WH-1000XM3 headphones.

The Sony WH-1000XM4 is powered by 40mm hybrid drivers and QN1 noise-canceling processor that was introduced with the Sony WH-1000XM3. Though they have said to improve the algorithms which bring up to 20% better Noise Cancellation performance than WH-1000XM3.

The Sony WH-1000XM4 can be controlled and customized through the Sony Headphones Connect app. There is support for Sony’s LDAC codec on the headphones, but no Qualcomm aptX support. They have a claimed battery life of over 30 hours per charge with active noise cancellation on.

The Sony WH-1000XM4 Wireless Headphones are priced at Rs. 29,990 in India. As an introductory offer, Sony will be giving a discount of Rs. 1,500 till September 30. The headphones are available to buy on Amazon, Sony retail stores, major multi-brand electronics stores, and Sony’s online shopping portal shopatsc.com.

LG Q31 has been launched in South Korea. Jumping right into the specifications, the LG Q31 features a 5.7″ HD+ display and is powered by the MediaTek Helio P22 MT6762 octa-core processor with 3GB of RAM and 32GB of internal storage.

The LG Q31 phone features dual cameras on the back that includes a 13MP primary sensor and a 5MP wide-angle secondary lens. On the front, there is a 5MP sensor for selfies. The LG Q31 packs a 3000mAh battery with no fast charging support.

2. Launch date for Moto E7 Plus is set for September 23 in India.

3. A bug in iOS 14 resets the default mail and browser app after every reboot.

4. Acer Predator Helios 300, and Predator Triton 300 gets a Refresh with 10th Gen Intel Processors in India.