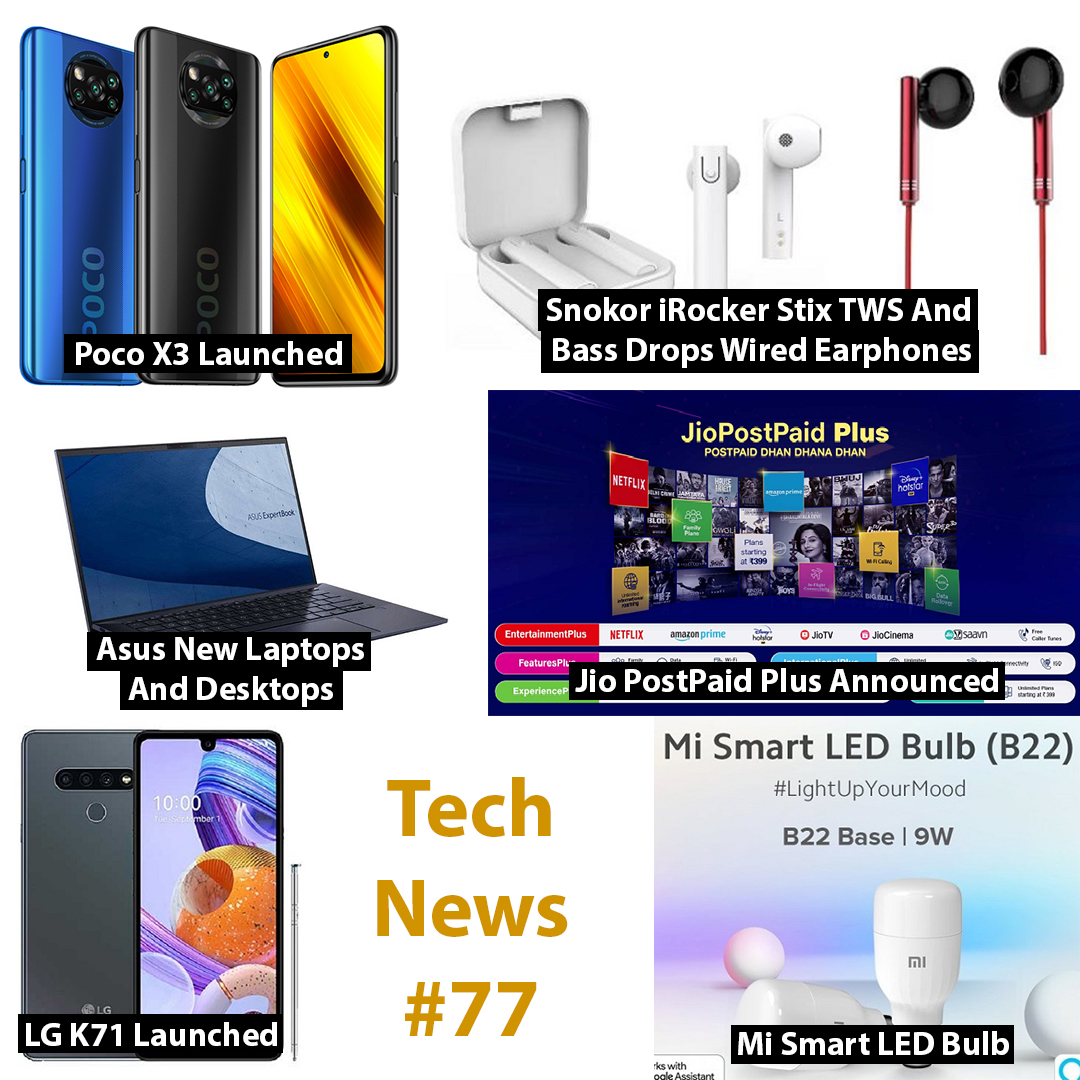 After many leaks and rumors, Poco X3 is finally official now and has been launched in India through a virtual event. It is a slightly tweaked variant of the Poco X3 NFC that was introduced in the European markets earlier this month.

The smartphone has a quad rear camera setup that includes a 64MP Sony IMX682 primary sensor, a 13MP sensor with a wide-angle lens, a 2MP depth sensor, and a 2MP sensor with macro lens. On the front, there is a 20MP sensor for selfies. The phone also comes with a massive 6000mAh battery with 33W fast charging technology.

2. Asus ExpertBook And ExpertCenter Series Of Laptops And Desktops Launched.

Asus ExpertBook B9 features a 14″ display. Under the hood, it is powered by a 10th-generation Intel Core processor, paired with up to 16GB of RAM and two PCIe 3.0 x4 SSDs (up to 4TB). For connectivity, the laptop features two Thunderbolt 3 and HDMI ports, along with support for Wi-Fi 6 (802.11ax).

It comes with a Harman Kardon-optimized audio system and Amazon Alexa support. The ExpertBook B9 starts at Rs. 1,02,228.

Asus ExpertBook P2 is powered by a 10th-generation Intel Core processor, paired with a 7200 RPM HDD. Customers can also opt for PCIe 3.0 x4 SSDs for storage. The laptop features a 14″ FHD display with a 180-degrees hinge design.

Asus ExpertBook P1 has two models – a 14″ display and a 15″ display variant. The laptops are powered by 10th-generation Intel Core i5 processors and feature USB 2.0 Type-A ports, an HDMI output, along with a microSD card reader.

The ExpertBook P1440 includes military-grade 810G certification, a fingerprint sensor, an HD camera, a 180-degree lay-flat hinge, and a 44Wh battery. the price of these laptops starts at Rs. 25,323.

The all-in-one PC series comprises two models, both powered by up to 10th-generation Intel Core i5 processors. The 22″ Asus AiO V222FA features an ultra slim-bezel NanoEdge FHD display that offers full sRGB color gamut. It packs up to 8GB of DDR4 RAM with a dual-storage capability (up to 1TB HDD + up to 512GB SSD).

The iRocker Stix TWS earbuds have multi-functional button control that can be used to play/pause tracks. They pack a 40mAh battery in each earbud and the charging case has a 300mAh battery, offering a total playtime of 16 hours. The case can be fully charged in 1.5 hours via its USB Type-C port.

The Snokor iRocker Stix TWS earbuds are priced in India at Rs. 1,499 and are available in black and white color options. The earbuds will go on sale today, September 22, via Amazon.

The Snokor Bass Drops wired earphones features 14.3mm bass boost drivers. the earphones feature one-button control that can be used to play/ pause music with one click and twice for changing to the next song or to receive/decline a call.

The Snokor Bass Drops earphones are priced at Rs. 449 and are offered in Black, Green, and Red color options. The earphones will be launched tomorrow, September 23.

LG K71 has been launched. Coming right to the specifications, the LG K71 runs on Android 10 with LG’s custom UI on top. The phone features a 6.8″ FHD+ display. The LG K71 is powered by the Mediatek Helio P35 (MT6765) octa-core processor with 4GB of RAM and 128GB of internal storage.

On the rear, the LG K71 features a triple camera setup that includes a 48MP primary sensor, a 5MP sensor with a wide-angle lens, and a 5MP depth sensor. On the front, we get a 32MP sensor. The phone also packs a 4000mAh battery as well.

It also comes with some additional features like dual speakers with DTS:X 3D Surround support and a stylus pen. The phone will be available in two color options – Holo Titan and Holo White. However, there is no announcement on the availability and pricing of this smartphone.

According to Xiaomi, the bulb has a life span of approximately 25,000 hours. The bulb itself has been made from polycarbonate and plastic-clad aluminum. It can produce 16 million colours and you can choose your favourite hue using the Mi Home app.

You can connect the bulb to the mobile through WiFi. The smart bulb can also be controlled using Google or Alexa voice assistants. The Mi Smart LED Bulb (B22) is priced at Rs. 799 and can be purchased from the Mi online store.

With Jio Postpaid Plus, users will get subscriptions to Netflix, Amazon Prime Video, and Disney+ Hotstar VIP, as well as access to Jio apps with over 650 live TV channels, video content, 5 crore songs, and more than 300 newspapers.

Jio Postpaid Plus plans range from Rs. 399 to Rs. 1,499. All of these plans come with unlimited voice calling and SMS and subscriptions to the three content streaming services.

Jio Postpaid Plus will be available starting September 24. The lone regular Jio postpaid plan with Rs. 199 rental will continue to be offered.

6. Mi Powerbank 3i with up to 20000mAH capacity and 18W fast charging launched in India.