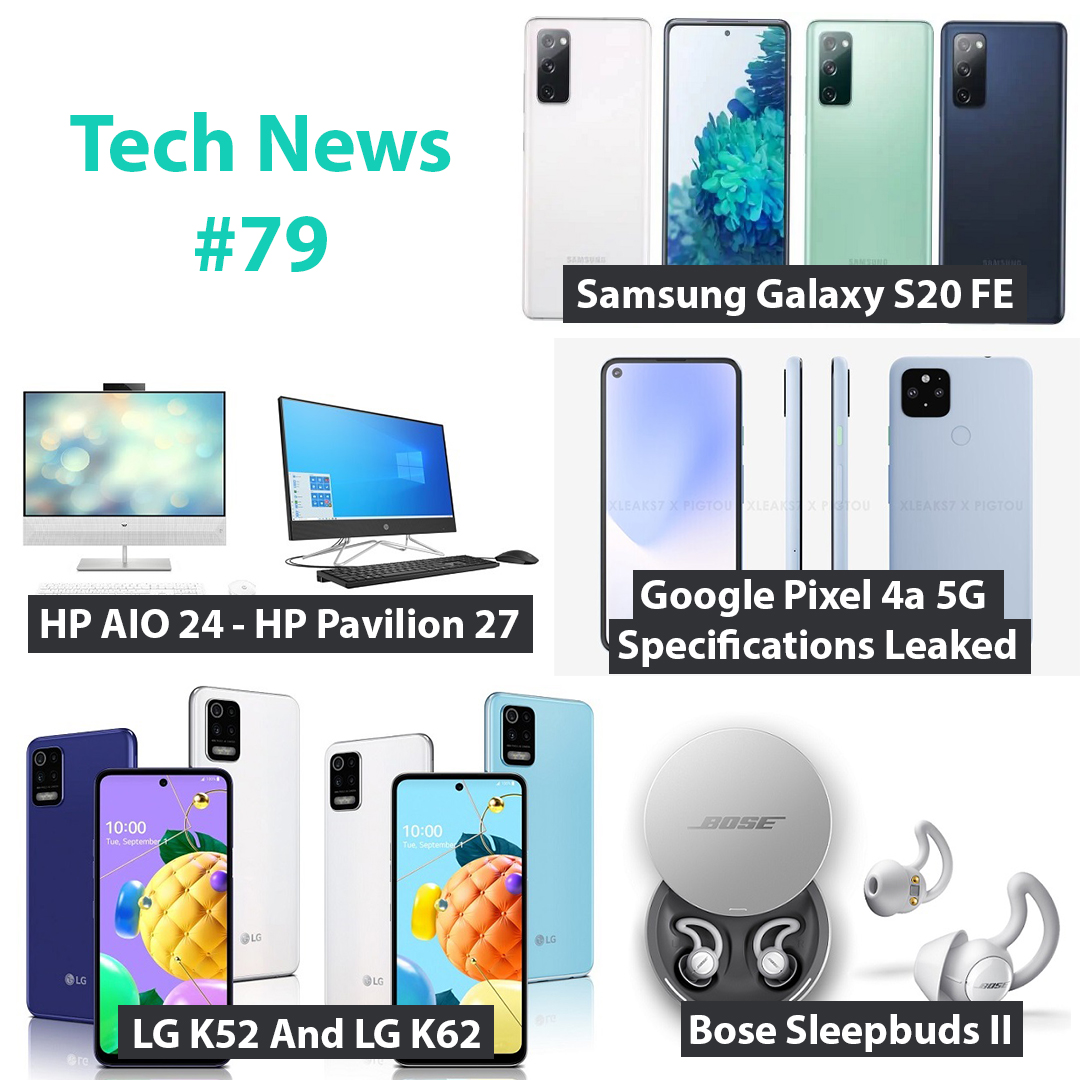 The charging case is made from aluminum and The earbuds are made of plastic and have silicone tips. Additionally, the earphones also offer passive noise.

The Bose Sleepbuds II can last up to 10 hours on a single charge and it takes about six hours to charge the earbuds completely. The charging case, on the other hand, can be charged in three hours. The case can provide 30 additional hours of battery life.

The Bose Sleep app lets you set alarms, change volume, and choose from a selection of 14 noise-masking tracks. It comes with several relaxation options as well, including 15 Natures capes and 10 Tranquilities. The Bose Sleepbuds II cannot play your regular music or help receive phone calls as they are only designed to offer better sleep.

The Bose Sleepbuds II TWS earphones are priced at $249.95 (approximately Rs. 18,500). The earphones are currently up for pre-orders in the US and will start shipping from October 6.

LG K62 and LG K52 have been launched. Both the smartphones come with quad rear cameras, fingerprint sensor, NFC, and a hole-punch display. The pricing of both phones will be announced later.

The LG K52 runs on Q OS based on Android 10. It comes with a 6.6″ HD+ FullVision display and is powered by the Mediatek Helio P35 octa-core processor, paired with 4GB of RAM and 64GB of internal storage.

LG K62 also runs on Android 10 with LG’s Q OS on top just like the K52. It features a 6.6″ HD+ FullVision display. The phone is powered by the Mediatek Helio P35 octa-core processor, paired with 4GB of RAM and 128GB of internal storage.

Samsung S20 Fan Edition has been finally announced by the company yesterday at the Galaxy Unpacked For Every Fan virtual event. It is a toned-down version of the regular Samsung Galaxy S20 flagship phone.

The Samsung Galaxy S20 FE offers the triple rear camera setup that includes a 12MP primary sensor with Optical Image Stabilization (OIS), a 12MP sensor with an ultra-wide lens, and an 8MP telephoto sensor. For selfies, the smartphone comes with a 32MP camera. It also packs a 4500mAh battery with 15W fast charging support and an IP68 rating.

The price of the Samsung Galaxy S20 FE starts at $699 (approximately Rs 51,600) for the 5G variant and comes in different RAM and storage variants like 6GB RAM + 128GB, 8GB + 128GB, and 8GB + 256GB. There will be six color options – Cloud Red, Cloud Orange, Cloud Lavender, Cloud Mint, Cloud Navy, and Cloud White and the phone goes on sale starting October 2 in select markets. The price of the 4G variant of the smartphone is yet to be revealed.

HP launched two new All In One PCs in India – the HP AIO 24 and the HP Pavilion 27. The new AIO PCs come with Amazon Alexa integration and feature an HD pop-up webcam. Both AIO PCs also include dual microphones, inbuilt speakers, and dedicated graphics support.

The HP AIO 24 features a 24″ IPS display and is powered by the 10th-generation Intel Core i5 processor, paired with Nvidia GeForce MX330 graphics. The AIO PC also comes with a WideVision FHD infrared (IR) pop-up webcam. There are also built-in microphones and speakers.

It also comes with an SSD2 primary drive for a faster boot-up experience, along with an optional HDD for secondary storage. The AIO includes a pop-up wide-vision IR webcam as well as quad microphones that support voice commands via Alexa. There is also a wireless Qi charging pad at the base for mobile devices.

Google Pixel 4a 5G specifications have been leaked online before the launch. The new Google phone that will be a 5G variant of the earlier launched Pixel 4a but with some changes in the internals.

The Pixel 4a 5G is supposed to be powered by the Qualcomm Snapdragon 765G 5G processor. Leaks also suggest that there will be 6GB RAM and 8GB RAM options along with 128GB of internal storage.

As for cameras, the phone is suggested to come with dual cameras at the back, same as the Pixel 5. A 12.2MP Sony IMX355 primary sensor and a 16MP secondary sensor ultra-wide lens. The phone is also said to have an 8MP selfie camera sensor at the front.

The Google Pixel 4a 5G is reported to have a 3,885mAh battery that would support 18W fast charging. The smartphone is also said to retain the headphone jack.

The pricing of the Google Pixel 4a 5G was announced at the launch of the Pixel 4a last month and it is $499 (approximately Rs. 36,900). Pixel 4a 5G is likely to launch on September 30 through a virtual event.

4. Samsung Galaxy F41 is set to launch on October 8 in India.

7. Redmi to launch new audio-centric products in India on September 30.