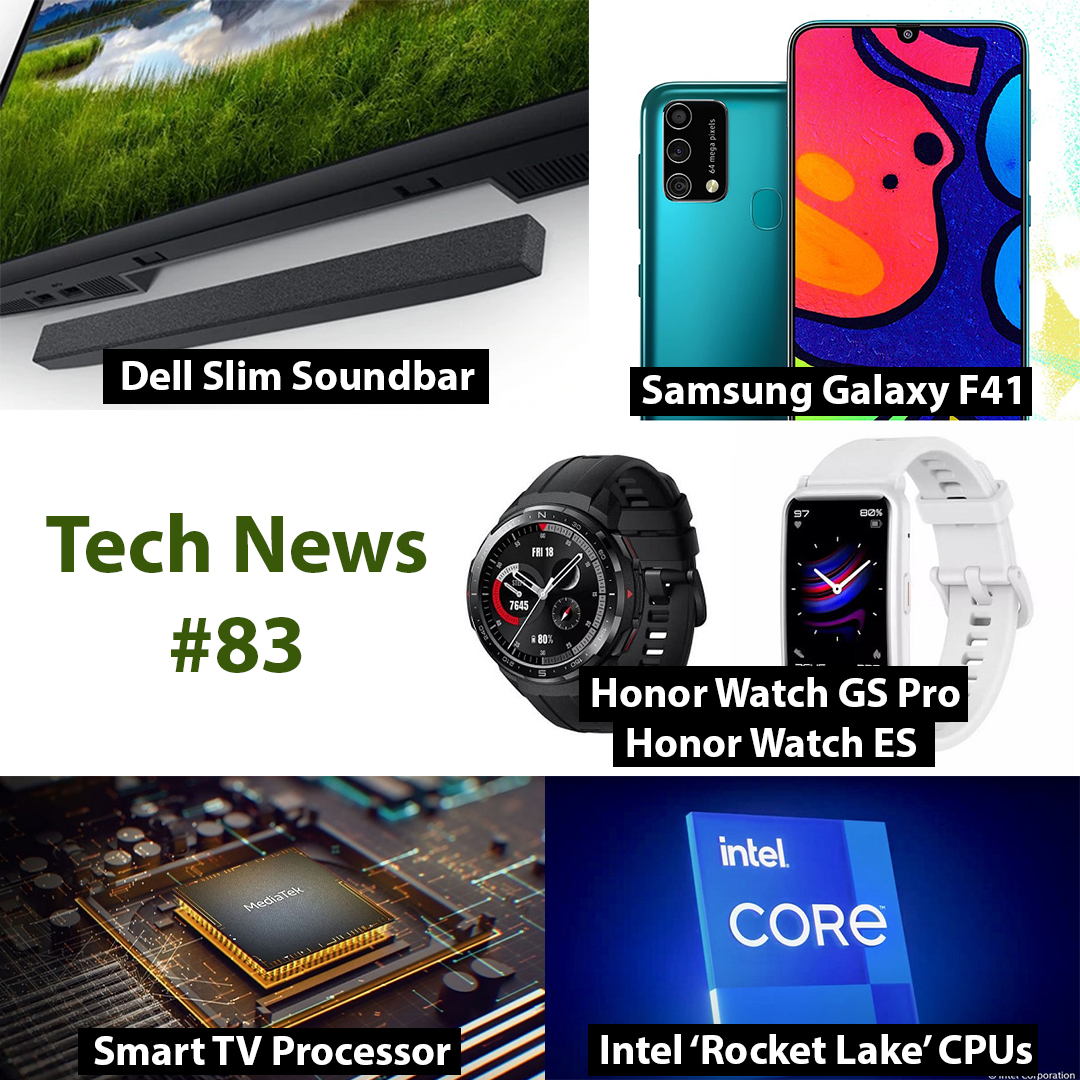 The MediaTek MT9602 processor will debut with the upcoming Motorola TVs that are being launched in partnership with Flipkart on October 9.

The Honor Watch GS Pro comes with over 100 Workout Modes, such as skiing, hiking, mountain climbing, trail running, and swimming. The smartwatch also has a TuRelax Stress monitor and TruSleep for better mental health and sleep tracking, respectively.

the Honor Watch ES features a 1.64″ rectangular AMOLED touch display with a 2.5D protection and 280 x 456 pixels resolution. It comes with 12 Animated Workout Courses and 44 Animated Exercise Moves. There are also 95 Workout Modes as well as an Automatic Workout detection functionality.

The Honor Watch ES also comes with a SpO2 monitor and 24×7 heart rate monitoring as well as TruSleep Monitor and TuRelax Stress Monitor. The company claims the Honor Watch ES can deliver up to 10 days of battery life on a single charge.

The Honor Watch ES is priced at Rs. 7,499 and comes in the Meteorite Black color option. The Honor Watch ES will be available for purchase through Amazon starting October 17 during the Great Indian Festival sale.

Dell Slim Soundbar SB521A has been launched in India as the “world’s slimmest and lightest soundbar”.  It is designed for the Dell P2721Q, P3221D, P3421W, and Dell UltraSharp U2421E monitors. It comes with a built-in magnetic mount to attach the soundbar under the monitor.

The Dell Slim Soundbar SB521A has active speakers that produce 3.6W of power. It has a frequency response range of 180 to 20,000Hz. The amplifier is integrated and the soundbar is powered by a USB port.

The Dell Slim Soundbar SB521A is priced at Rs. 4,899 in India. It is listed on the Dell India website which states that it will ship in 1 to 2 weeks.

Samsung Galaxy F41 has been launched in India today. It is their first phone in the F Series. The Samsung Galaxy F41 features a 6.4″ FHD+ sAMOLED Infinity U display. The phone is powered by the Exynos 9611 octa-core processor with 6GB RAM and up to 128GB of internal storage.

The smartphone comes with a triple rear camera setup that includes a 64MP primary camera, an 8MP secondary camera with an ultra-wide lens, and a 5MP live focus camera. The phone also comes with a 32MP front camera housed inside the U-shaped notch. The Samsung Galaxy F41 packs a huge 6000mAh battery with 15W fast charging support.

The Samsung Galaxy F41 with the base 6GB/64GB variant is priced at Rs. 16,999 and the 6GB RAM/128GB storage variant of the phone is priced at Rs. 17,999. It will go on sale via Flipkart and Samsung’s website starting October 16. It comes in Fusion Green, Fusion Black, and Fusion Blue colors.

Intel has announced the first details of its upcoming ‘Rocket Lake’ desktop CPU lineup, which will be sold as the 11th Generation Core CPU family. According to a blog post by John Bonini, Intel’s VP and GM of Client Computing Group Desktop, Workstations, and Gaming, the new chips will be launched in the first quarter of 2021.

John Bonini stated – “I’m also happy to confirm that the next generation 11th Gen Intel Core desktop processors (codenamed “Rocket Lake”) is coming in the first quarter of 2021 and will provide support for PCIe 4.0.“

While Intel hasn’t posted anything about this on their main website, this blog was posted on a Medium page run by them. The Intel blog post was published just a day before AMD is expected to unveil its next-generation ‘Zen 3’ architecture.

5. Microsoft Office to get a new version without a subscription model in the second half of 2021.

7. Qualcomm to launch a gaming smartphone in partnership with Asus.