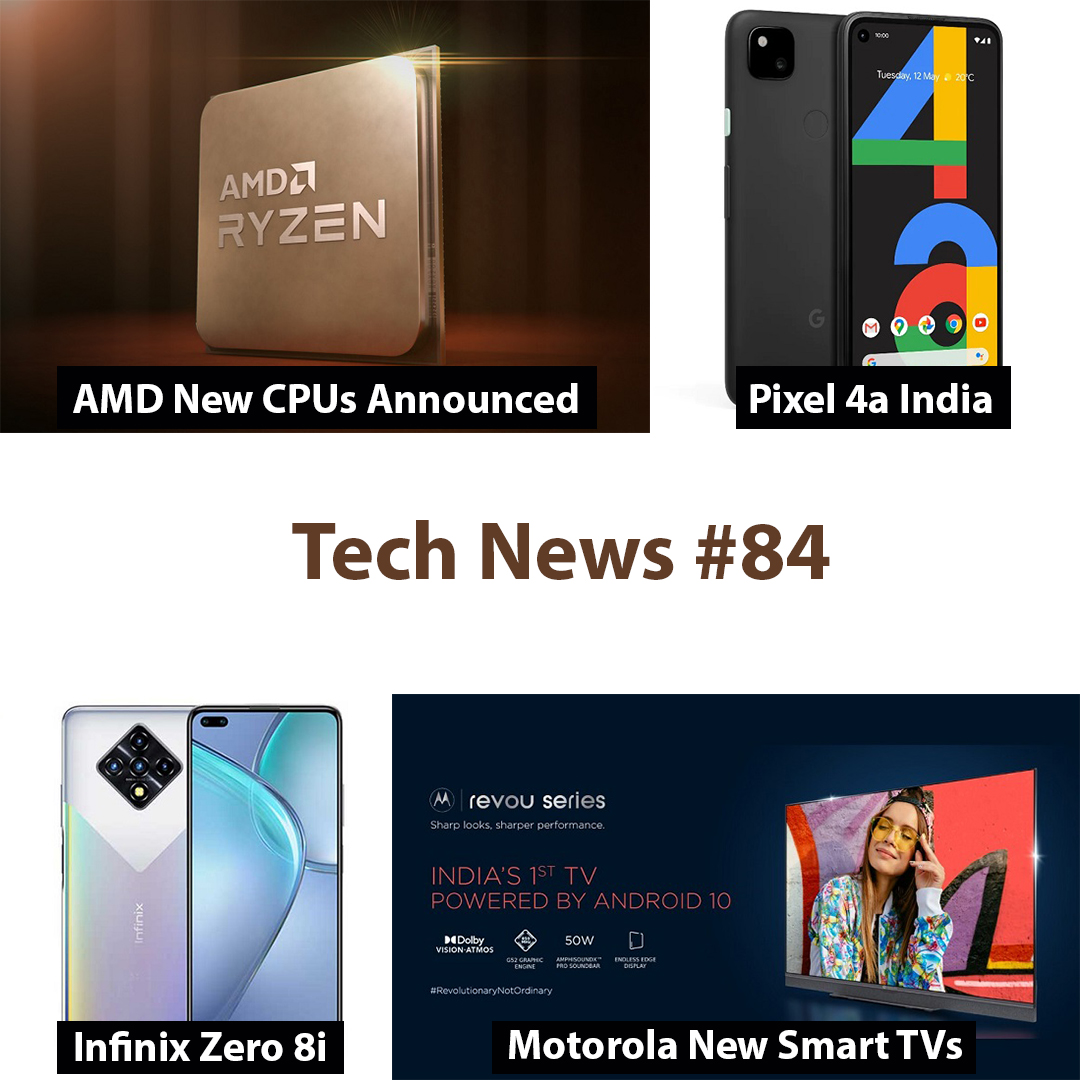 1. Google Pixel 4a Launched In India.

Google Pixel 4a has been launched in India. The Google Pixel 4a runs on Android 10 with promised Android updates for 3 years and a bunch of Pixel-specific features including the new Google assistant design, live captions, and more.

Pixel 4a has a single 12MP sensor and an 8MP selfie shooter on the front. It also comes with a decently sized 3140mAh battery with 18W fast charging support.

Google Pixel 4a is priced at Rs. 31,999, however, for a limited period, the company will offer the phone at a promotional price of Rs. 29,999. Pixel 4a will go on sale in India through Flipkart starting October 16.

2. Infinix Zero 8i Launched in Pakistan.

The Infinix Zero 8i runs on Android 10 with XOS 7 skin on top. The phone features a 6.85″ FHD+ display with dual hole-punch cut outs and a 90Hz refresh rate. The phone is powered by the MediaTek Helio G90T octa-core processor paired with 8GB of RAM and 128GB of internal storage.

Infinix Zero 8i is priced at PKR 34,999 (approximately Rs. 15,600). It is available in Black Diamond, Green Diamond, and Silver Diamond color options. Pre-orders are slated to begin on October 11 on Daraz.com, and the sale will begin on October 15.

AMD finally announced their new 5000 series of desktop CPUs through an online event. The new CPUs are based on their updated ‘Zen 3’ architecture. The new processors are said to offer up to a 26 percent increase in performance in gaming and a 19 percent improvement in instructions per cycle compared to the current Ryzen 3000XT series.

The Ryzen 9 5950X features 16 cores and 32 threads with a base speed of 3.4GHz and boost speeds of 4.9GHz with 72MB of total cache memory. AMD claims the highest single-threaded performance of any “desktop gaming processor” in addition to having more cores for better multi-core performance across mainstream (non-workstation) desktop CPUs. It will be priced at $799 (approximately Rs. 58,760).

The Ryzen 9 and Ryzen 7 have 105W TDPs and will not come with a stock cooler, the Ryzen 5 5600X has a 65W rating and will come with AMD’s Wraith Stealth cooler in the box. According to AMD, the reason for not providing the stock cooler in their flagship processors is because enthusiasts might prefer their own higher-end heatsink or liquid-cooling thermal solution.

Before closing the event, AMD CEO Dr. Lisa Su showed off AMD’s new Radeon RX 6000 ‘Big Navi’ Series GPU. The GPU was said to be running with a Ryzen 5900X CPU and was able to push out 60+ FPS in Borderlands 3 at 4K using the Badass quality preset.

All four CPUs will be available globally on November 5 and the GPU is due to be launched on October 28.

Motorola launched four new smart TVs in India, two in each series. Motorola Revou is a more premium series of TVs while the ZX2 targets the more budget category of TVs.

Coming to the specifications, all of the four smart TVs run on Android 10 for TV. The TVs are powered by a 1.5GHz CA53 quad-core processor, paired with 2GB of RAM and Mali-G52 GPU. Internal storage on the Motorola ZX2 range is at 16GB, whereas the more premium Motorola Revou range offers 32GB of onboard storage.

For the ZX2 series, both the models offer a total sound output of 40W and integrate two speakers and two tweeters. They come with a traditional convex stand and have side ports for easy accessibility.

5. Zoom adds an option to buy add-ons in rupees.